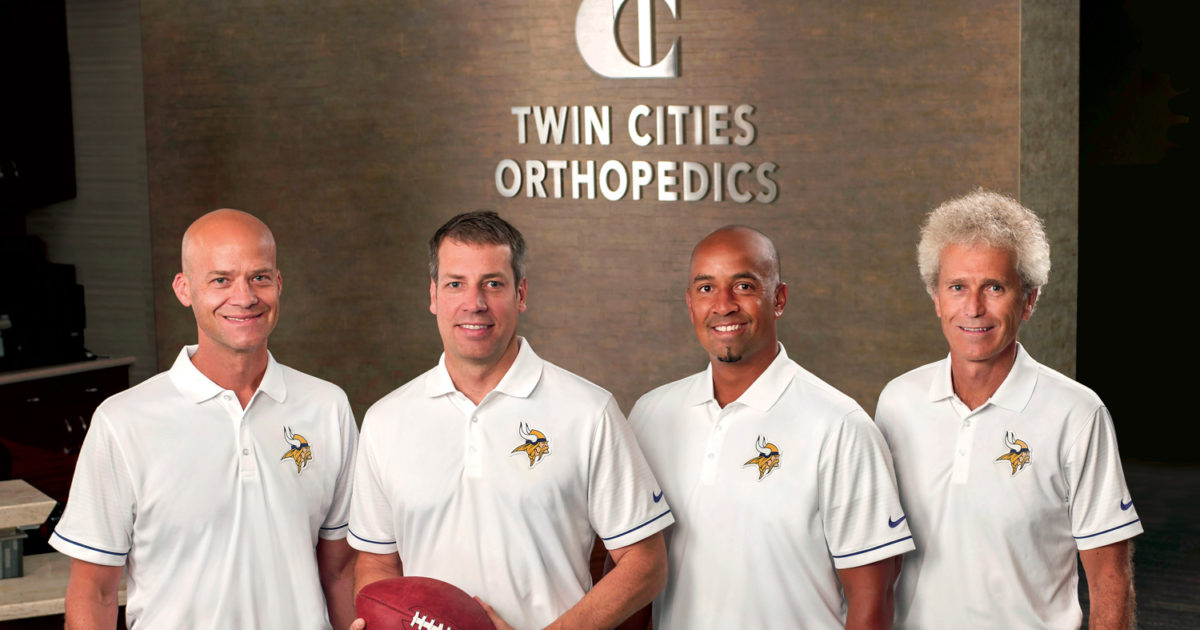 It’s not easy getting to the NFL. Every year, more than 1 million kids play high school football in the U.S., but only a fraction of those players have the talent and opportunity to play at the next level. The number of NCAA Division I-FBS football players is only about 15,000, and in the NFL there are fewer than 2,000 players. Just making it to the pros is an incredible achievement, but the real challenge is sustaining a long, productive career.

The key to a successful career is staying healthy, which is why players, coaches, staff, management, owners and the NFL place enormous emphasis on player safety. Teams seek the most-talented physicians on the planet to diagnose and treat their players because there is so much at stake. The Minnesota Vikings choose to partner with Twin Cities Orthopedics (TCO).

TCO has been the Official Orthopedic Provider for the Vikings since 2015. Drs. Chris Larson, Chris Coetzee, Greg Lervick and Dave Olson are sports medicine specialists who dedicate their time as team physicians for the Vikings. We sat down with them to learn about what it’s like.

All of the physicians share the same sentiment. Being a team physician for the Vikings is an honor, and working with the organization is like being a part of a big family. Like any family, everyone plays a role. Dr. Coetzee specializes in foot and ankle care, Dr. Larson specializes in hip and knee care, Dr. Lervick specializes in shoulder and elbow care, and Dr. Olson specializes in head injuries and internal medicine, among a number of other areas of sports medicine and primary care. Together, they form an incredible team.

The role is high profile, and there’s a lot of pressure that comes with being on camera, making split decisions during games or being discussed in the media. But that’s what makes it exciting, and it’s what these guys love to do.

Dr. Larson puts it well. “You need to really love the role, and I consider it a role, not a job, as we are just making sure the athletes and the entire organization are well taken care of.” And you go out of your way to take care of family.

We’re all doing our part

Being on the sidelines during games, taking care of players behind the scenes and making decisions alongside Vikings leadership and ownership is, frankly, pretty cool. But the physicians agree that the novelty and excitement of being in the presence of world-class, professional athletes fades quickly.

“Really, when it comes down to it the medical side is the same for all levels of athletes,” Dr. Olson said. “There are just different challenges that go along with working with elite athletes.”

Much of this is separate from the treatment. What’s the best long-term decision for the player? What does the player’s medical history look like? Where are we in the season? There’s a lot to think about when you treat the pros.

Of course, the doctors absolutely love working with the Vikings, and a big reason why is because the players are extremely dedicated to their crafts. Professional football players don’t treat the game like an extracurricular activity or pastime. It’s their job, and they’re motivated to perform their job at the highest level possible.

“Treating them is great because they are willing to listen and work hard because they want to return quickly, and at an elite level,” Dr. Coetzee said.

Learn from the pros

All athletes need rest, even the Vikings, which is why their workouts focus on efficiency and working on the little things to get better. Positional technique and mental preparation during the season can have more positive impact on performance than aggressive speed and strength drills. Coaches and parents of younger athletes should take note and design practices and workouts appropriately. Otherwise, players are at risk of overuse injuries caused by excessive, repetitive use of the same muscles and ligaments without ample rest.

Nutrition also plays a critical role for professional athletes. No matter the level of competition, all athletes should make it a priority to consistently eat a nutritious diet if they want to perform at their best.

“Like anything, work hard, eat right, get plenty of sleep, listen to your parents, report injuries or problems to your medical staff as soon as possible,” Dr. Olson said, “and remember that your schoolwork comes first.”

TCO physicians are on the sidelines during all Vikings games, and as Dr. Larson describes it, “The ultimate sports medicine experience is responding to injuries during games.” The pressure is on, as there is limited time to assess the situation, diagnose the injury and provide a recommendation for treatment.

Depending on the situation, a player may be examined on the field or sideline. Many variables have to be considered, including how the injury occurred, how the player is positioned, what they’re saying, how they are holding an arm or a leg, and whether or not there is a deformity. Cameras are on, coaches need information, time is of the essence. It’s up to the team physician to determine if the player will be able to go back in immediately, after a period of rest and additional evaluation, with a brace or taping, or not at all if further imaging is required and return to play is not clear or possible at the moment.

Just like the Vikings practice and prepare for their opponent, the medical team practices and prepares for moments like these. Dr. Coetzee describes it as a “well-rehearsed process.” Eric Sugarman, the Vikings’ Head Athletic Trainer, is the first responder, followed by Dr. Larson. These two evaluate the player on the field, and if further expertise is necessary, another member of the team is called to join. Although there’s always a lot at stake, it’s important for the team to provide a calming presence and act with mechanical precision. The key is to keep everyone in their comfort zone.

What’s the most remarkable return from injury you’ve ever seen?

Dr. Larson: Probably one of our players returning after a horrible foot injury in one game and a femur fracture in another.  Amazing to see how these athletes bounce back in the face of unbelievable adversity!

Dr. Olson: Probably the work done by Eric Sugarman and the medical staff on Adrian Peterson’s return from an ACL tear, as well as former Gophers basketball star Trevor Mbakwe’s return from a similar injury at the University of Minnesota. Both are amazing athletes!

Dr. Lervick: I have two! Drew Brees’ amazing return from a significant labrum surgical repair in his throwing shoulder. Not only did he return, but with great on-field success and longevity. And (of course) Brett Favre’s speedy recovery from shoulder surgery before leading the Vikings to a great 2009 season.

What are you most excited for this season?

Dr. Olson: Being at the new stadium, and a trip to the Super Bowl! (fingers crossed)

Dr. Larson: Playing in
the new stadium, and another year to do this with great friends.

Dr. Coetzee: The new stadium, especially since it was so cold last year!

What are you best at: punt, pass or kick?

Dr. Larson: Pass, for sure.

Dr. Coetzee: I grew up playing rugby, so I’m actually probably best at running with the ball!

If you could play one position on the Vikings, what would it be?

Dr. Coetzee: Free safety, because it’s closest to the position I played in rugby, and I like to tackle. I enjoy watching Harrison Smith play!

Dr. Olson: Long snapper, because you usually have good hair and make a nice living. Plus, you get a lot of time to chill at practice.

Do you play “Madden”?

Dr. Lervick: I can’t compete with my son and his buddies, so I leave that to the next generation!

Dr. Olson: Yes, I play as the Vikings (of course) and win against my kids a fair amount of the time!

Prediction time: When will the Vikings win the Super Bowl?

Dr. Lervick: I love their chances this year, but Super Bowl 52 in 2018 at US Bank Stadium would be incredible!

Dr. Olson: I think February 2017 would be the correct answer!

Many thanks to Drs. Olson, Lervick, Larson and Coetzee for taking time out of their busy schedules to chat. Also, a huge thank you to the Vikings for continuing to be a great partner.