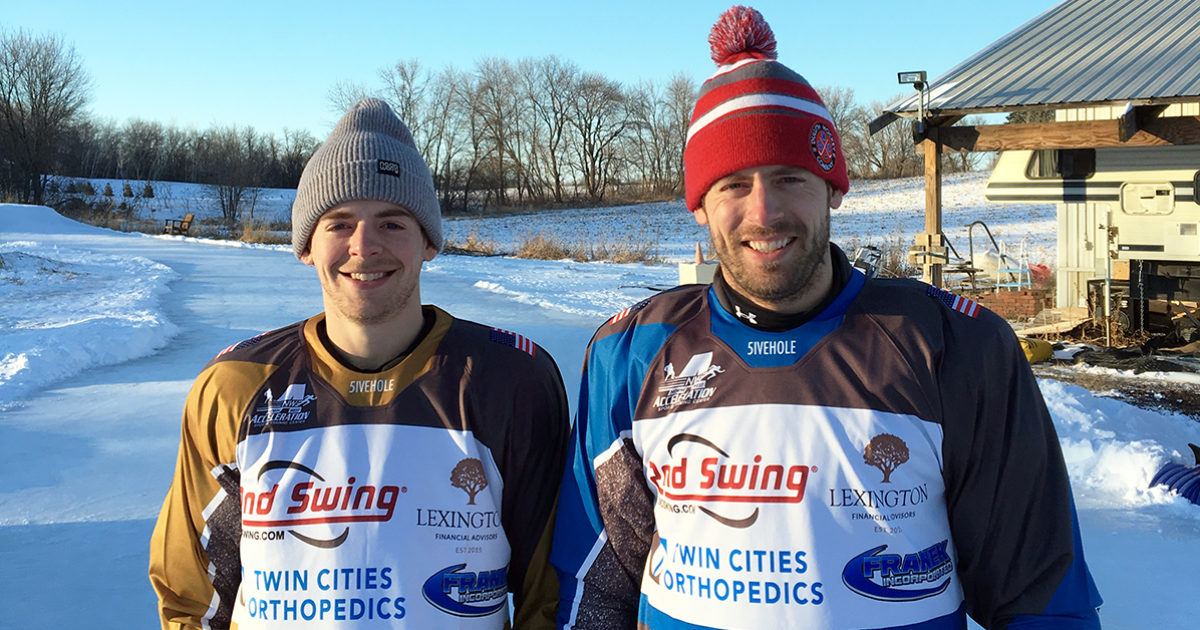 What began as a last-minute on-a-whim tryout has become a globetrotting adventure for a pair of Twin Cities brothers.

Tyler Witty was a sophomore at the University of Minnesota Duluth in December 2011 when a flyer inside a nearby sporting goods store caught his eye. Red Bull Crashed Ice was holding a qualifier at Duluth’s Amsoil Arena that day. Tyler quickly registered online and took part in the flat-ice event.

A number of words may come to mind when trying to attach adjectives to Crashed Ice, but “flat” probably isn’t one of them. The steep, winding course that’s part of the sport known as ice cross downhill snakes its way around the Cathedral of St. Paul every January.

To oversimplify its description, ice cross downhill is an extreme sport that features individuals in hockey equipment (everything but the stick) racing over jumps and through narrow turns.

Tyler qualified for the 2012 St. Paul event at the Duluth tryout weeks earlier. When Tyler crossed the finish line for the first time in St. Paul, his older brother, Dan, was a wave in the sea of spectators.

“I thought, ‘This is definitely something I have to get into,’ ” Dan said.

Today, Tyler, now 26, and Dan, 33, both compete around the world in ice cross as members of Team USA. On Friday and Saturday, the New Prague natives will represent Twin Cities Orthopedics at Crashed Ice in St. Paul.

Dan started his ice cross career a year after Tyler and took to it just as quick. After St. Paul came competitions in Amsterdam, then Canada, Finland and France. The duo compete 4-5 times per year in Crashed Ice and smaller Riders Cup events. Their brothers, Ryan and Alex, have participated in previous Crashed Ice St. Paul events.

The Wittys aren’t new to extreme/action sports. In addition to playing hockey through high school, the brothers have experience wakeboarding, waterskiing and snowboarding and point to each sport as having a role in their relatively fast acclimation to ice cross. They also train on inline skates at indoor skate parks, cross-train and do plyometric workouts to get race-fit.

The brothers won’t get to see the St. Paul course until Thursday, when competitors walk the track before going on an inspection run.

“I get most nervous at race time,” Tyler said. “The course is much bigger and more intimidating in person once you get into the start ramp.”

Part of those nerves are due to anticipation of competing in a high-profile event in front of their home-state supporters. The St. Paul course also has a reputation of being more technical/difficult than its sister tracks.

“It’s super-nice,” Tyler said. “To be able to compete in your home state, St. Paul’s definitely a good spot for the sport.”

Dan agrees and enjoys being able to have his family, including three kids, watch.

“That aspect is exciting,” he said. “It pushes you to want to do your best when everyone is watching.”

TCO is a proud supporter of the Witty brothers as they compete at Red Bull Crashed Ice St. Paul.

“Thank you very much for the support. We’re excited for this year, and we’re going to give it our best,” Tyler said. “Hopefully, you’ll be seeing us in a lot of races and on the podium.”

“I always tell people that I’m just thankful that I’ve had the opportunity to compete,” Dan said. “We’ve gotten to know a lot of great people along the way.”

“The best thing you can do for this sport is get on a track and do it,” Dan said. “There’s nothing that can prepare you more than actually doing it. You need to figure out how to get through this stuff with three other people on the track.”